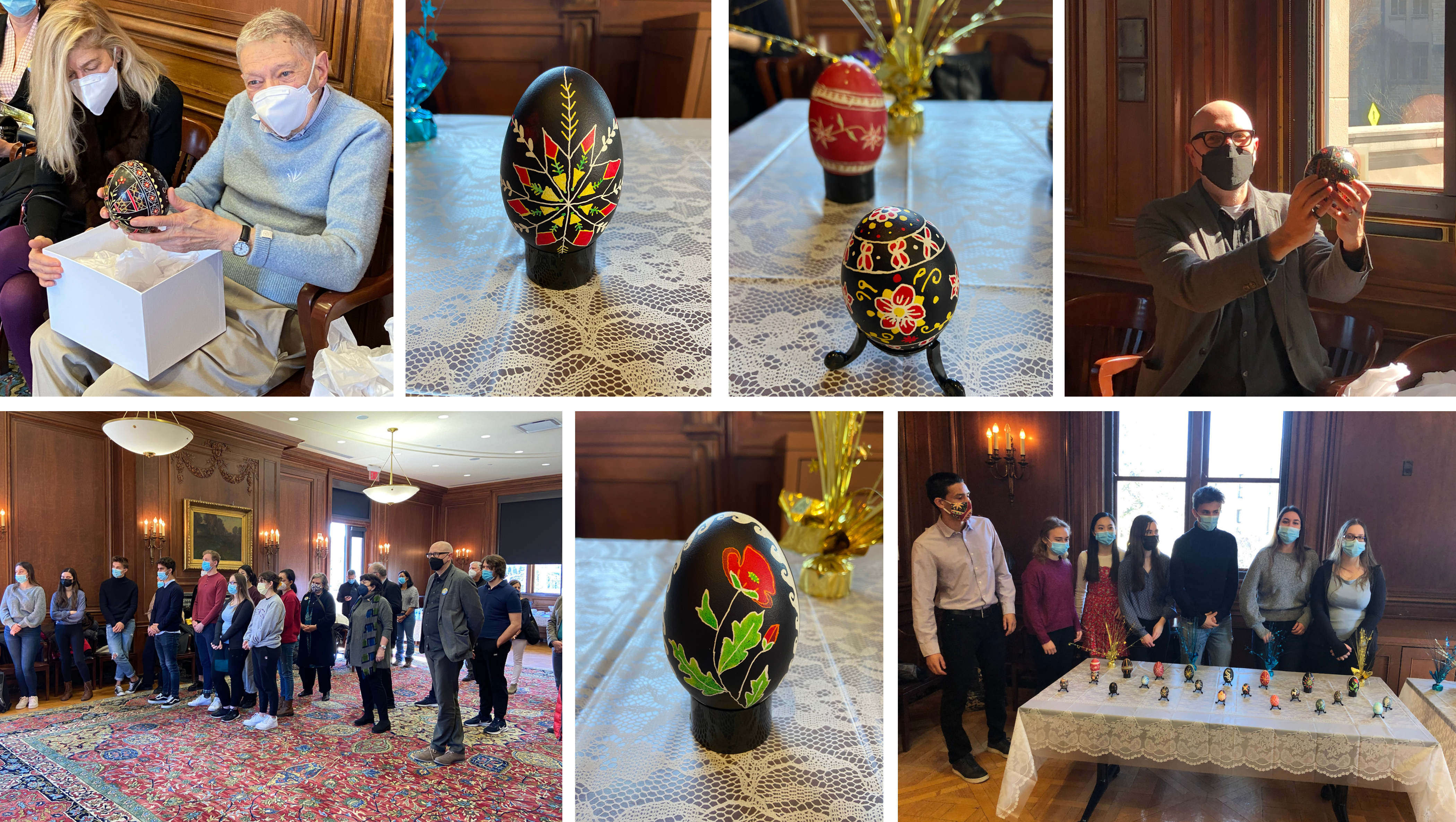 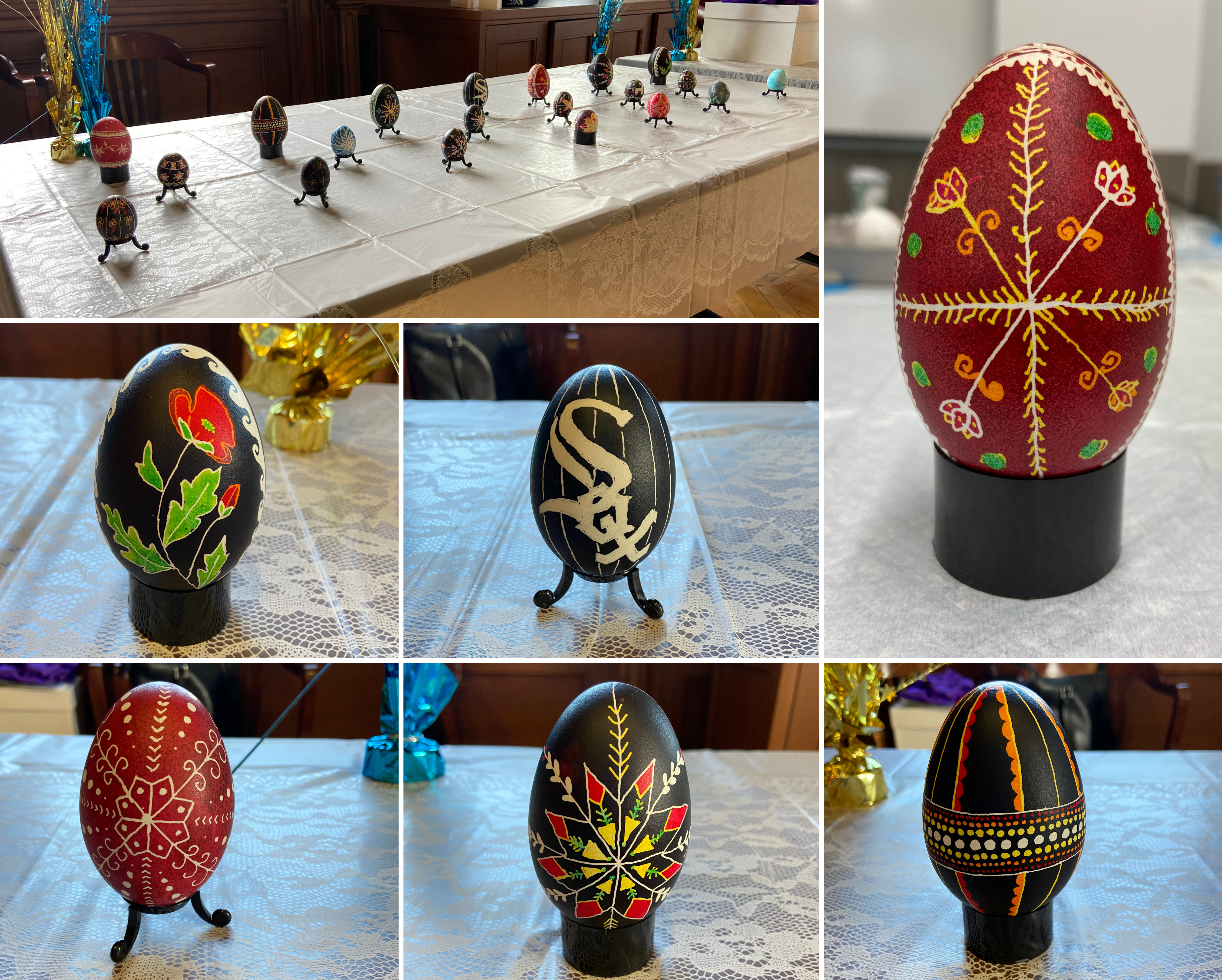 Pysanky is an ancient matriarchal folk art that uses eggs as a canvas. It originated among pagans in lands that we know of as Ukraine today. The word Pysanka/y (singular/plural) derives from the Ukrainian word pysaty, meaning “to-write”. These pagans used hollowed out chicken bones filled with melted beeswax as a writing tool, to depict and communicate their beliefs and understandings of the world around them symbolically. They also used motifs and colors in nature to express their feelings and emotions. Images of the sun represented life, horns and livestock virility and prosperity. The color black denoted eternity, the color orange, strength. In the late first millennium, missionaries used pysanky to teach Christianity. Nets that had illustrated bounty and abundance, were now used to explain that Christ was a “fisher of men”. Small circles and dots that depicted rain, were now “Mary’s tears of sorrow”. Thus, pysanky transformed into a Lenten tradition that came to represent all of Christianity itself in Ukraine. So much so, that under Soviet rule, making pysanky was prohibited and punishable. This, along with Ukrainians who left and assimilated into other countries, threatened pysanky with extinction. While Ukraine’s independence from the Soviets in 1991 did allow for the resurgence of pysanky, that is yet again jeopardized, by Russia’s military invasion of Ukraine. It is up to people like myself, descendants of Ukrainian immigrants, living in free countries throughout the world, to continue this ancient folk art. Uniting all of us, in history, tradition and a culture unbound by borders, with the hope of peace.

Janet Hundrieser is the Great-Granddaughter of Ukrainian immigrants from the tiny village of Volkivtsi in Ternopil, Ukraine. Growing-up with a very large extended family, she was only able to identify her Ukrainian relatives by the pysanky, wheat stalks and colorful textiles in their homes. When she was a little girl, her grandmother explained the fundamentals of how to make pysanky and she was captivated. After her grandmother passed away, she trekked into the Ukrainian Village, year after year, for books and supplies in the pre-internet world. She finally learned how to make pysanky in earnest, building knowledge and skills every Lent. She has hosted “Egg Days” in her home, where she has taught family, friends, neighbors, and colleagues how to make pysanky and enjoy traditional food celebrating Ukrainian culture. In Ukrainian folklore, it is believed that as long as pysanky are being made, good will triumph over evil and peace will prevail throughout the world. It is her hope this is true and happily shares her pysanky and expertise. Janet also manages the Facebook Group, “Drapak-Zabiaka Family History and Photographs”, where her Ukrainian cousins exchange information, ask questions, learn family stories and enjoy multi-generational Zooms.

Janet is fascinated by the interplay between color and design in everyday aesthetics. She explores that dynamic not only through pysanky, but in mosaic, decoupage, sewing, quilting, needlepoint, embroidery, cross-stitch, crochet and knitting. During the first year of the pandemic, she made and donated over 400 facemasks and this last year, completed seven quilts. Besides these creative interests, Janet uses DNA to help adoptees find their parentage and family history via genetic genealogy. In her spare time, she enjoys museums, cooking, baking, reading biographies and memoirs, and music.

She began her career at NU in 2005 at The Center for Public Safety, providing program support for law enforcement, traffic, and engineering training. In 2014 she became the executive assistant to the chair of pathology at the Feinberg School of Medicine. Since 2017 she has been the administrator for the Science in Human Culture Program. She attended DePaul University and received a B.S. degree in psychology from Northwestern University.