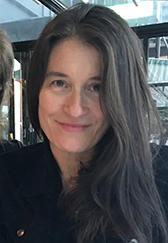 Christina Kiaer (Ph.D., University of California, Berkeley) teaches twentieth-century art, specializing in Russian and Soviet art, the politics of realism and the avant-garde, and feminist theory and art.

Her book Imagine No Possessions: The Socialist Objects of Russian Constructivism(MIT Press) was published in 2005, and was awarded an Honorable Mention by the Wayne S. Vucinich Prize of the American Association for the Advancement of Slavic Studies. That year she also published an interdisciplinary volume of essays on Soviet cultural history, co-edited with Eric Naiman, on Everyday Life in Early Soviet Russia: Taking the Revolution Inside (Indiana University Press). She has published a number of essays related to her current book project, A Biography of the USSR in Pictures: Aleksandr Deineka and the Problem of Socialist Realism, including "Modern Soviet Art Meets America, 1935," in the anthology Totalitarian Art and Modernity; "The Swimming Vtorova Sisters: The Representation and Experience of Soviet Sport in the 1930s" in the anthology Modern Sport in Soviet Culture and Society; and essays in the catalogs from the recent Deineka retrospective exhibitions at the State Tretyakov Gallery, Moscow, the Palazzo delle Esposizione in Rome, and the Fundación Juan March in Madrid.

She served as consultant curator on the 2009 exhibition "Rodchenko and Popova: Defining Constructivism" at the Tate Modern Museum, London, for which she wrote a catalog essay entitled "His and Her Constructivism," and as a special advisor to the 2011 exhibition "Aleksandr Deineka: An Avant-Garde for the Proletariat" at the Fundación Juan March.

In 2007 she was a visiting scholar at the Institute for Art and Cultural Studies at the University of Copenhagen, and she has held postdoctoral research grants from the American Philosophical Society, the Social Science Research Council, the International Research and Exchanges Board (IREX), the Harriman Institute at Columbia University, and the J. Paul Getty Foundation, among others. Since 2010, she has served as the field editor for 20th Century for the online art history review journal caa.reviews.

Professor Kiaer is on leave for the academic year 2011-2012 as a Member of the School of Historical Studies at the Institute for Advanced Study, Princeton.