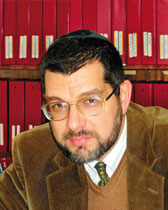 Yohanan Petrovsky-Shtern (Ph.D. Moscow, 1988; Brandeis, 2001) is an Associate Professor of Jewish History in History Department and the Crown Family Center of Jewish Studies at Northwestern University. He teaches Early Modern, Modern, and East European Jewish history and culture, Jewish Mysticism and Kabbalah, and Slavic-Jewish Literatures. He holds a Ph.D. in Modern Jewish History from Brandeis University (2001) and a Ph.D. in Comparative Literature from Moscow University (1988). He is a recipient of multiple grants, including Rothschild Fellowship, Memorial Foundation of Jewish Culture grants, National Endowment for the Humanities, and Fulbright. He has been a Sensibar Visiting Professor at Spertus College in Chicago; a Visiting Scholar at Ecole des Hautes Etudes Sociales in Paris; a Visiting Scholar at the Institute for Advanced Studies at Hebrew University in Jerusalem; and a Visiting Professor at the University Kyiv-Mohyla Academy in Kyiv, Ukraine. In 2009, he received a Northwestern University Distinguished Teaching Award. He published more than a hundred articles in history and comparative literature and authored three books, Jews in the Russian Army, 1827-1917: Drafted into Modernity (Cambridge: Cambridge University Press, 2008), The Anti-Imperial Choice: the Making of the Ukrainian Jew (New Haven and London: Yale University Press, 2009), and Lenin’s Jews (forthcoming with Yale University Press, 2010). At present he is working on a book, “Shtetl as it Was, 1790-1830,” reconstructing and contextualizing the material culture of an East European trading town.