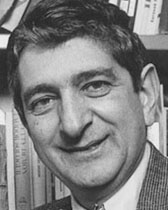 Irwin Weil was born in 1928, on the banks of the Ohio River - Cincinnati, Ohio. He is the son of the former owner of the Cincinnati Reds. He received his AB and MA from the University of Chicago and his Ph.D. from Harvard University, including work under Roman Jakobson and Renato Poggioli. He has also worked in the professional theatre both on and off Broadway, together with the renowned German director, Erwin Piscator, who first put Berthold Brecht on the Berlin Stage.

He worked for three years under the eminent demographer, Evgenij Mikhailovich Kulischer, who made the widely accepted calculation of the hideous population losses during World War II. At the Library of Congress Weil worked for three years on the project to make an accurate census for the USSR in the early 1950s. We later discovered that the USSR used many of our figures.

He started teaching at Harvard University, continued at the then young Brandeis University, and came to Northwestern University in January of 1966. By that time he had already been travelling and working in the USSR for six years. He had already laid the foundation for his future work in USA-USSR/Russia relations.

In 1966 he was the American representative at the Paris conference which started the International Association of Teachers of Russian and Russian Literature (MAPRIAL). Out of this came the extensive exchange of students and scholars between the two countries, an influx of fresh air into the previously hermetically sealed container of Soviet Russian philologists. Cooperation was strong on both sides, in spite of efforts, also on both sides, to prevent the scholarly and pedagogical contacts. Many were the scholars and seminars organized to bring about closer relations on both sides.

He also participated in many Soviet, later Russian, projects to bring public attention to Russian culture and its relations with American culture. He instigated, together with Soviet friends, a TV competition in knowledge of world literature, between Soviet and American High School students, with each group visiting the other, first in Moscow, then in Chicago. The programs were seen by over three million Soviet viewers, as well as some American viewers.

At the moment, Professor Weil and his Russian counterpart, Professor Marina Kaul, are establishing an American Studies Center at the Moscow Humanities University. With the cooperation of many Russian and American specialists, from many different institutions, it promises to bring a unique light on the work of American specialists in both countries.

Professor Weil has also been active in working on Russian Music in the context of Russian culture. He has established a unique course, which includes both study of literary sources and public performance, by students, of difficult but deeply moving Russian operas. In this project, he works together with Dr. Natalia Lyashenko, of the Northwestern University Music School.

In all of his work, Professor Weil has maintained close relations with literally thousands of students, and he values this work very highly.

Professor Weil's inter-cultural experiences and autobiography were recently featured in The Daily Northwestern.