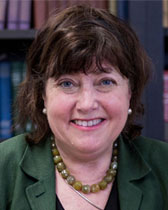 Clare Cavanagh works on nineteenth and twentieth-century Russian, Polish, and Anglo-American poetry.  Her book, Lyric Poetry and Modern Politics: Russia, Poland, and the West (Yale UP) received the 2010 National Book Critics Circle Award for Criticism; was named an Outstanding Academic Book of the Year by Choice Magazine; and received the ASEEES/Orbis Book Prize for Polish Studies (2010).  She is an Associate Editor of the revised Princeton Encyclopedia of Poetry & Poetics (2012).  She is currently working on an authorized biography of the Nobel Prize-winning poet Czesław Miłosz (under contract, Farrar, Straus, and Giroux).

She is an acclaimed translator of contemporary Polish poetry.   She received an American Academy of Arts and Letters Award in Literature in 2018 for her “bedazzling versions of the playful, weighty, metaphysical poets writing in the last half-century.”  Her version of Adam Zagajewski’s Asymmetry (2018) received the Harold Langdon Prize for Translation from the Academy of American Poets, and was a finalist for the National Book Critics Circle Award in Poetry.  The New York Times Book Review noted in a review of Nobel Laureate Wisława Szymborska’s Map: Collected and Final Poems (2015): “If there were a Nobel-like prize for translators, Szymborska’s translators Stanislaw Baranczak and Clare Cavan­agh would have been awarded it at once.”

She has received fellowships from the National Endowment for the Humanities, the John Simon Guggenheim Memorial Foundation, the Social Science Research Council, the American Council of Learned Societies, and The Whiting Foundation.  Cavanagh's essays and translations have appeared in the Times Literary Supplement, The New York Times Book Review, The New Republic, The New Yorker, The New York Review of Books, Bookforum, Partisan Review, Common Knowledge, Poetry, Literary Imagination and other periodicals.  Her work has been translated into Russian, Polish, Hungarian, French, Dutch, Japanese, and Chinese.