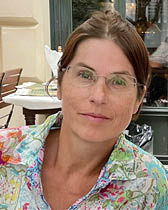 Martina Kerlova, coordinator of second-year German and Director of Undergraduate Studies (DUS) for the Slavic department, has been a member of the German and Slavic Departments since 2002. Before coming to Northwestern she earned Master’s Degrees in German Literature from Masaryk University in Brno, Czech Republic, and in German Studies from Charles University in Prague. Her theses were on “Schriftsteller des Grazer ‘Forum Stadtpark’ und Wolfgang Bauer im realen Umfeld der Gesellschaft” and on “The Politics of the Sudeten German Party in Interwar Czechoslovakia”.  She has earned fellowships from DAAD, ÖAD, the Robert Bosch Stiftung and the Konrad-Adenauer-Stiftung, and has studied in Konstanz, Düsseldorf, Graz, and Leipzig. At Northwestern she has received grants from the Hewlett Foundation to develop video- and computer-based material for learning Czech.  In addition to German, Martina has taught first, second and third-year Czech in the Slavic Department as well as a cultural courses: “Prague: City of Cultures, City of Conflict” and “Czech New Wave Film: Cinema with a Human Face.” Martina is working on a translation into Czech of Remaining Relevant after Communism: The Role of the Writer in Eastern Europe, by Andrew Wachtel, and is preparing a new course, “Germans and Slavs.”  In her previous lives, Martina taught German in Prague and Vienna and administered the European Union’s “Leonardo” retraining program for the Czech Republic. In her free time, she likes to read literature, attend theater, backpack in National Parks and go cross-country skiing.