Lawrence B. Dumas Professor of the Arts and Humanities; Professor, Slavic Languages and Literatures 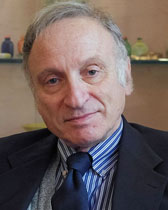 Saul Morson's work ranges over a variety of areas: literary theory (especially narrative); the history of ideas, both Russian and European; a variety of literary genres (especially satire, utopia, and the novel); and his favorite writers -- Chekhov, Gogol, and, above all, Dostoevsky and Tolstoy. He is especially interested in the relation of literature to philosophy.

Professor Morson typically works on a number of projects at once.  He is working on a study of the Brothers Karamazov.

Professor Morson has won "best book of the year" awards from the American Comparative Literature Association and the American Association of Teachers of Slavic and East European Languages; he is a member of the American Academy of Arts and Sciences; and he is the only Northwestern professor to have held simultaneously two endowed chairs, one for research and one for teaching.

Courses taught in the last 3 years: