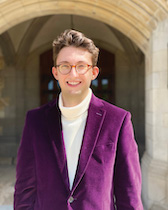 His research focuses primarily on the Russian avant-garde and the relationship between politics and aesthetics. More information can be found on his website, magerasimovich.com.